(Annie Black) – WARNING: There is extreme profanity included in this AnnieGram.  I apologize in advance, but think it’s important to reprint the authors’ words verbatim so you can see just how deranged and unhinged these people are.

If such language offends you, please stop reading when you get to the second warning below.  Otherwise…

As chronicled in Friday’s AnnieGram, I flew to Washington, DC to attend Wednesday’s “Stop the Steal” rally that was marred by some fringe elements who assaulted police officers and damaged property.

THEY should be punished.  Severely.  Not those of us who simply exercised our constitutional right to peaceably assemble and “petition the government for a redress of grievances” related to how the 2020 elections were conducted.

To be absolutely clear: I wasn’t part of the march down Pennsylvania Avenue, never entered the Capitol and didn’t cross the barricades.  In fact, here’s a shot from where I was standing as people started climbing the steps… 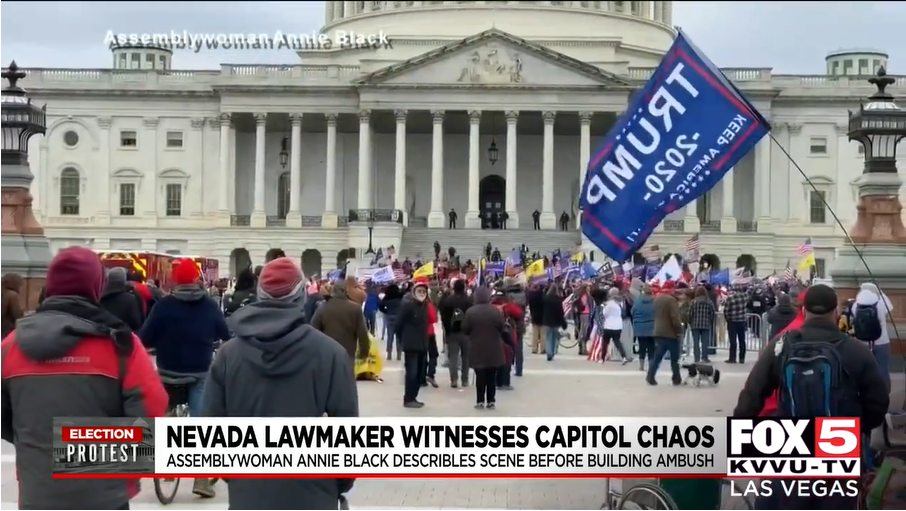 But that doesn’t matter to the unhinged left bent on “cancelling” anyone with an opinion different from theirs.  So naturally, calls rang out on Thursday demanding that I resign as your representative in the Nevada State Assembly.

For example, the Democratic Legislative Campaign Committee issued a demand “for every Republican legislator involved in the insurrection to resign immediately.”

“‪@RealAnnieBlack literally aided and abetted criminals. Any legislator near her should call for her resignation and or expulsion. Simple.”

I don’t think there’s a more eloquent way to respond than to quote U.S. Army Brigadier General Anthony McAuliffe when the Germans demanded his surrender on December 22, 1944 at the Battle of the Bulge in World War II…

For those who may not understand the slang, you’re not alone.  Here’s how the Associated Press explained it at the time…

When the officer handed McAuliffe’s answer to the German officer waiting just outside the American perimeter of defense, the latter asked: “Is your commander’s reply favorable? If it is, I am empowered to continue negotiations of terms.”

“My commander’s reply is ‘Nuts,'” the American responded.  “What does that mean?” asked the German.  “It means go to hell,” replied the American.  That the German understood. He saluted and marched off.

She issued a statement on Friday – on the “Nevada Assembly Democratic Caucus” letterhead and co-signed with Democrat Assembly Speaker Jason Frierson – that I consider to be a not-so-veiled threat to kick me out of the Legislature.

I think she’s still mad that I chose not to join her caucus.

If Ms. Titus and Mr. Frierson want to try not to seat a duly elected representative for lawfully exercising her constitutional rights simply because they don’t like what I stand for and believe…well, I’ll let THEM explain that to YOU.

But their joint statement was mild compared to what some Twitter trolls wrote – mostly anonymous; many from out of state – demanding my resignation.

I was called a “lying traitor,” a “disgrace to humanity,” “dangerous,” a “domestic terrorist,” a “murderer,” “un-American,” “disgusting,” a “seditionist,” a “conspirator,” “reprehensible,” a “treacherous blight,” and my personal favorite, “Insurrection Annie.”

“You run with Nazis, you are a Nazi.”

To wrap up, I want to thank certain members of the media who have handled reporting on this controversy professionally and objectively.  Here are links to their stories…

Oh, and Kevin Wall of KMZQ 670 AM, who himself got slammed just for interviewing me by some goof hiding behind the Twitter handle “BuzzIzarownd”…

“Love the dumbaases you have on !!!!  The fucking dumber the better – when will @AdamLaxalt be on as he’s the dumbest !!!”

And I especially want to thank Nevada Republican Party Chairman Mike McDonald – who, many of you might remember, I ran against for party chair in 2019 in a rather spirited, sometimes heated, race – for issuing this statement of support…

“Assemblywoman Black had every right to assemble in our Nation’s Capital. She did not break the law, participate in damaging property, or incite violence. In fact, she very clearly condemned those who broke the law. It’s ridiculous to be asking for her resignation for simply exercising her First Amendment right.”

Just proves that political opponents need not become mortal enemies.  Thank you for this, Mr. Chairman.

“Did the Nevada taxpayers pay for @RealAnnieBlack to fly all the way to DC…?”

Once again, sorry to disappoint.  I was there on my own time and my own dime.

Now, don’t we all have some football to get to?

P.S.  Those who broke into the Capitol, assaulted police officers and/or damaged property should be punished.  However, I just found this video clip of Capitol Police Officers opening the door for protestors and standing aside to let them in.

While some protestors did unlawfully “storm” the Capitol, others appear to have been welcomed in with open arms.

P.P.S.  Here’s a photo of your “dangerous seditionist” with my fiancé in front of the Washington Monument on Wednesday morning… 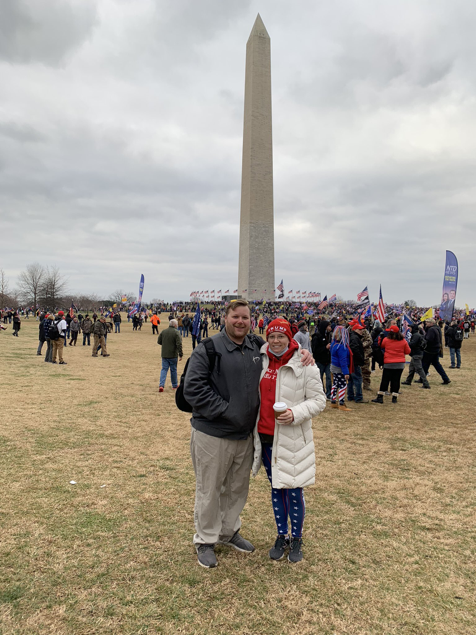 “If there be time to expose through discussion…falsehoods and fallacies…the remedy to be applied is more speech, not enforced silence.” – Justice Louis D. Brandeis

“To suppress free speech is a double wrong. It violates the rights of the hearer as well as those of the speaker.” – Frederick Douglass

“18 months ago, I never thought I’d be a Congresswoman.  I just got fed up.  If you’re out there fed up at the state of this country right now, you’ve got to decide what YOU can do to make the change yourself.  Don’t wait for others to make the difference. Be the difference.” – Rep. Lauren Boebert (R-CO)

Annie on the Air: Interview with Kevin Wall

Nevada State Lawmaker Who Was at U.S. Capitol During Riot Refuses To Quit

Thank you for standing up, and withstanding all of the onslaught from adult bullies. You are my representative and I’m proud to have voted for you. Please continue to be my voice in the legislature. I don’t like what’s been happening in Nevada and elsewhere and I speak through my vote.

I truly can’t believe the comments from democrats and others. Of course why would you even think of resigning We elected you so go to Carson city and DO IT

Good job Annie! Don’t let the losers from the left get you down! Fight on!!

Do not resign. I agree with Republican Chairman McDonald. You had every right to attend the rally/protest. Thank you for having the courage to speak your mind and support our president in a law abiding, respectful manner. We need more people like you in office supporting and upholding our freedoms. Please do all you can to ensure our liberties remain intact and to end this unconstitutional censorship and cancel environment .

Ms Annie, You hang in there lady. This mongrel crowd that disrespected you shows what idiots they are. I never realized how vicious LIBS could be until the last 3 years. To me personally. Good luck to you…..Skip Wilson, Pistolsmith, Sparks, NV

NEVER in the past four years did we silence others
Not in the media, and certainly not by demanding they resign

Thank you for speaking up and supporting our constitution. God bless and thank you.

I am a 53 year old female and live in Vegas so I didn’t get to vote for you. I didn’t even know ABOUT you until this thing happened. Having said that, I agree with all of the positive feedback you are getting. It’s not easy being a female in politics, let alone a strong female! You keep doing what you’re doing and please above all, don’t let these bad apples spoil the bunch that truly believe you are a good person. Also, as for the “Insurrection Annie” nickname, although it sounds funny to you, I think you need to ditch that. Come up with something stronger and more positive. ( I was called Princess once because I got a ride from a co-worker when another person had to walk. I turned that around on her and took it in the context of “Yes, I AM a princess.”) Keep smiling!

The far left liberal Democrats are so evil, more evil then they know. Most Conservatives I know usually refrain from using very harsh words, and the liberals are really good at pushing our buttons, especially when they troll into conservative groups or sites. I wish something could be done. But I thank you so much for standing up and being strong. We need strong Conservatives to help fight for our Country. My prayers will be with you.

As a liberal Democrat (who is not evil btw) I encourage anyone to stand up for their freedom. I believe that those who think the election was stolen are seriously misguided and have sadly followed a pack of lies from a man who was desperate to keep the money coming in despite the fact that he lost the election. But Annie, you had every right to stand where you did. Those who broke in to the Capitol were seriously out of line, part of that peculiar mindset that mobs create. I have friends who voted for Trump and don’t think the election was rigged. And it’s hard to see the one you wanted not get in – just ask all of us who wanted Bernie lol! But please – if you’re a Q follower, get some help. Thinking that science is real, that all lives (including black lives) matter, that a woman has the right to chose what happens to her body, that the planet needs wise stewardship, the global concerns ARE our concerns too… does not make a person evil.

Don’t you dare back down from those pathetic losers.
As I see it, you have over 60000 constituents that are without representation. I seem to recall reading something about “taxation without representation”
So does not that qualify those 60k for tax exemption.
See how nutty Nancy reacts to that.