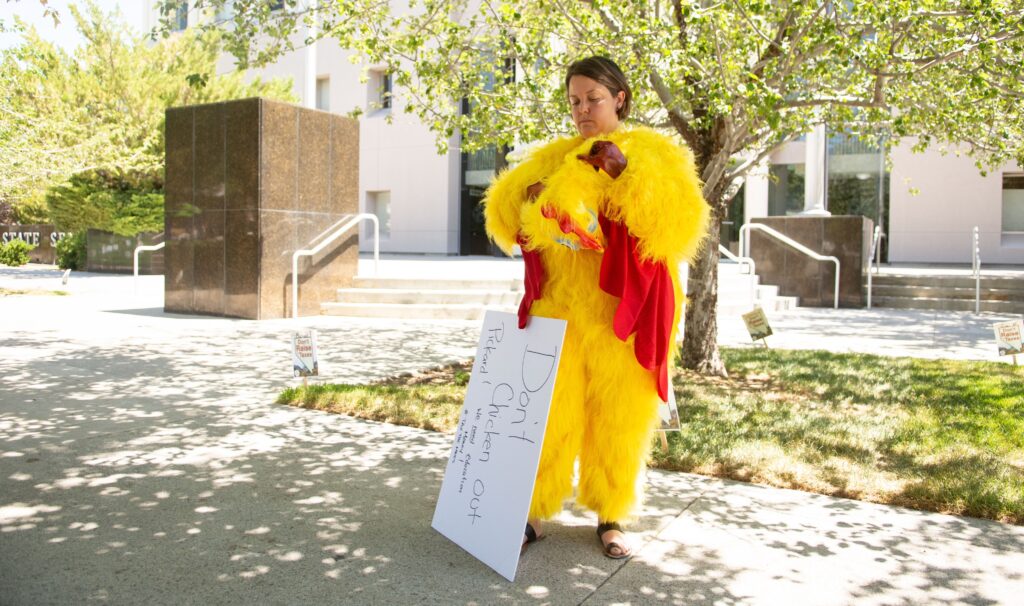 Which is exactly what legislative Democrats intend to do during Nevada Gov. Steve Sisolak’s “Special Session 2.0” in the next couple of days.

Although Nevada Secretary of State Barbara Cegavske has “repeatedly said for months that the 2020 general election would not be an all-mail election like the primary,” Democrats in Carson City, who control both houses of the Legislature, are planning to change Nevada law during Special Session 2.0 to force another all-mail election in November.

In a recent op-ed, the Progressive Poultry Princess made her case for obliterating long-standing Nevada election law – all in the name of “safety” and “security” – during the ongoing #SisolakShutdown.

But her arguments are lame, at best; misleading and outright false, at worst.  So let’s burn ‘em to a crisp…

“On Election Day during the primary, the average Nevadan waited over four hours to cast an in-person vote,” the left-wing wing-nut clucked. “This was with in-person and mail-in options available. … The last voter in Clark County waited in line for eight hours and cast a ballot at 3:08 AM the next day. This is unacceptable and must be fixed before November’s election.”

The Feathered Fabricator also accused Secretary Cegavske of playing partisan games “to disenfranchise voters by calling for an all in-person November election.”  And, of course, played the race card…

“Cegavske’s refusal to make voting accessible and safe during this pandemic is a clear attempt at voter suppression. It is no secret that people of color are disproportionately impacted by COVID-19. In addition, they are often the most overlooked voting groups and face the most challenges when it comes to voting.”

“Another common argument in support of conducting an all-mail election for the November general election is that voters should not have to choose between voting and their health. This is a false choice that reveals an elementary misunderstanding of Nevada’s election laws.

“Nevada has some of the most permissive voting laws in the country, and these laws, which are already in place, offer Nevada voters various options for exercising the franchise. Any registered voter in the state can request and vote with an absentee ballot. A valid excuse or reason is not required.

The long and short is this:  ANY registered voter who is afraid to cast an in-person ballot in November can again vote by mail by simply requesting a mail-in absentee ballot – just like in all our previous elections going back decades.

Magnus owes Secretary Cegavske an apology for making such an outrageously and obviously false allegation.

Secondly, yes, many people who waited until Election Day in the primary and tried to cast an in-person vote, rather than mail or simply drop-off their mail-in ballot, had long waits – especially in Clark County.  But that’s because there were only three in-person voting locations open.

Won’t be the case in November.

Now that the COVID “emergency” is behind us, all of the regular voting locations, as in past elections, will be open – as well as multiple voting locations for in-person early voting.

In other words, the long line problem that Magnus complains about has already been fixed by returning our elections to normal where you have the choice to either vote in-person or request an absentee ballot and vote by mail.

Lastly, the cost of conducting an all-mail ballot again in November will cost taxpayers millions of dollars that we simply don’t have, unless Magnus and her flock get the huge tax hikes – sorry, “revenue enhancements” – they’re looking for.

“Automatically mailing all registered voters in Nevada a ballot for the general election would be extremely costly. The printing and outbound postage costs alone would be over $2 million. Additional costs for equipment and voter education would push the total bill to between $4 and $5 million.

“Automatically mailing each registered voter a ballot would also represent a waste for the hundreds of thousands of voters who will vote in person and not use the ballot that was mailed to them.”

“We do not have to mail all registered voters a ballot to provide voting choices and ensure voters’ safety. We can simply rely on the laws already on the books. For the 2020 general election, I support easy access to absentee voting coupled with robust in-person voting opportunities, both during early voting and on Election Day.”

Magnus can use her chicken fingers to peck out all the op-eds and tweets she wants.  What she can’t do is make a rational argument for forcing all Nevadans into another all-mail election.

Sadly, that doesn’t mean the Democrat-controlled Legislature and Nevada’s Democrat governor won’t do it anyway during Special Session 2.0.  Because this isn’t about “safety” and “security.”  This is pure, raw partisan politics.

And they’re not about to let the current COVID-19 crisis go to waste.

“An all mail-in voting process increases the likelihood of voter fraud. … If people can stand in line at grocery stores and other businesses, we can do the same thing with voting locations.  They can be made safe for all.” – Nevada Republican Club

“The left throws out the specter of voter suppression often, much like the boy who cried wolf, but voter suppression claims ought not to be believed without evidence.” – Nevada Secretary of State Barbara Cegavske

Who Gets Spared the Budget Ax? All Depends on Your Definition of “Essential”

CRITICAL BATTLE: Whose Side are You On?

Uh-oh, Now I Done Gone and Did It!

WOW, What a Ride! Here’s What’s Next…