On Wednesday, the day the Legislature’s building sort of was reopened to the public, I posted a tongue-in-cheek sign on the door of my office that read: “Come On In. We’re Open. Don’t Mask.  Don’t Tell.”

Shortly after posting a video of it on social media, the Sergeant at Arms came to my office and advised that Democrat Speaker Jason Frierson ordered it be taken down.

So the building is sort of reopened, but free speech the Democrats don’t like is still shut down.

And lest anyone think I’ve broken some “rule” against signs on our doors, there are at least another dozen legislators who have signs on THEIR doors that have NOT been ordered removed. 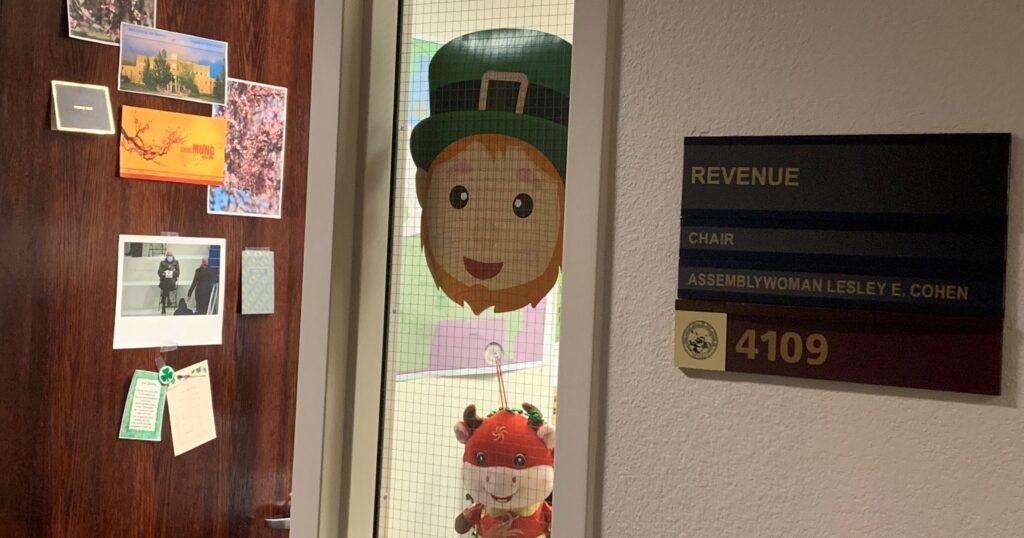 It seems like there are two separate sets of rules this legislative session.  One for me.  Another for everyone else.

Remember the old saying: “It’s not paranoia when they’re really out to get you.”

In any event, the Democrats are fooling the public into thinking the building is open when the hoops you have to jump through to gain access are ridiculous.  Consider this memorandum sent to legislators late Wednesday night…

“All persons authorized to enter the Legislative Building are required to obtain a stick-on badge that will be obtained from LCB staff at the mobile site across from Fifth Street from the Legislative Building. If your vaccine status has been verified, you just need to provide the LCB staff person your name and show your identification. You will then be issued a badge for that day.”

So in addition to being forced to wear a “scarlet letter” stick-on badge – essentially a “vaccine passport” – you have to show ID.  Yet the same Democrats who came up with this requirement to enter The People’s House refuse to require ID before voting.

* Sean Golonka reports: “Out of 249 bills and resolutions introduced by Republican legislators this year, 162 died at the deadline, including 121 bills that never received a committee hearing. Some of the top Republican-backed efforts that failed included election bills repealing expanded mail voting (AB134) and requiring proof of identity before voting (AB137, AB163) and attempts to curb the governor’s emergency powers (AB93, AB373).”

* AB190 would force private employers to pay sick leave to workers who aren’t themselves sick, but want to stay home with a sick family member.  Republicans who voted with the Democrats for this anti-business bill: Assemblywomen Jill Tolles, Melissa Hardy and Heidi Kasama and Assemblyman P.K. O’Neill

* AB19 would force homeschoolers to remove “Government” from their lesson plans and add “Multicultural Education.”  I voted against the bill.  But three Republicans voted with the Democrats to approve it: Assemblywoman Jill Tolles, Assemblyman Tom Roberts and Assemblywoman Melissa Hardy.

Tolles and Roberts are the co-assistant leaders of the Assembly GOP Caucus.  And some still wonder why I chose not to join the caucus?

“Am I to believe that minorities in this country are unable to obtain identification? Are Democrats saying that minorities can’t figure out how to obtain a state ID that is free in many states? Maybe they’re saying that they are just not motivated enough to obtain one. Either way, it’s simply the bigotry of low expectation.” – Dan Carr, Las Vegas Review-Journal, 4/15/21

Annie on the Air with KOOL 102

Yet Another Example of Republicans Voting Badly