(Annie Black) – Last week, Susan Furlong, Chief Clerk of the Legislative Council Bureau (LCB), ordered the Sergeant at Arms to remove a temporary paper sign on my office door, arguing it violated the COVID “rules” she and the Democrats created before the start of the session.

I responded in an AnnieGram on Saturday pointing out that Ms. Furlong herself was regularly violating her own rules by working in the Assembly Chamber without wearing a mask.

I included this photo of Ms. Furlong in action and noted her hypocrisy…

Well, guess who came to work on Monday and was suddenly wearing a mask? 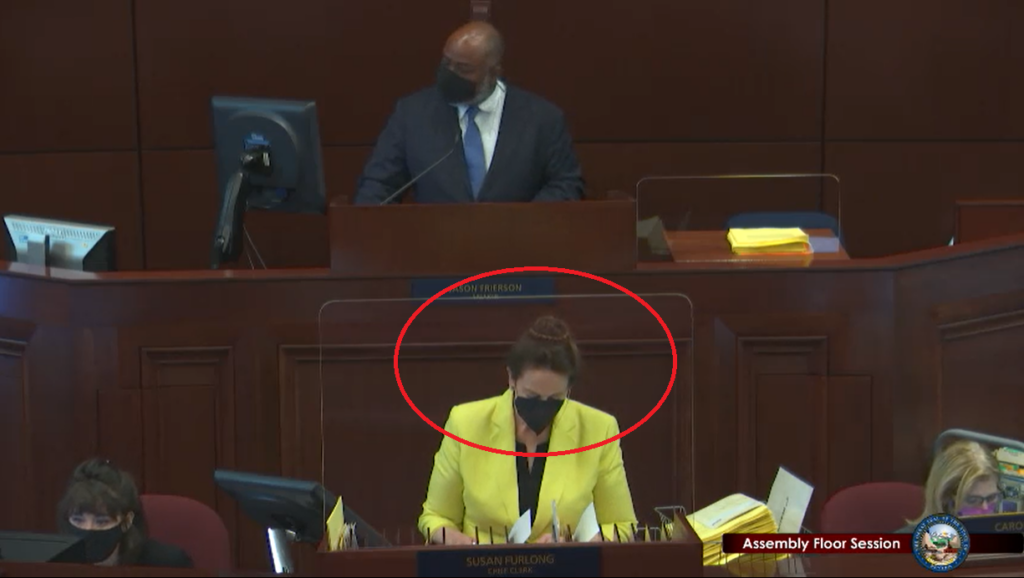 When you don’t stand up for yourself, they just walk all over you. If they think you can be pushed around, they’ll push you around.

But when you fight back…sometimes you win.

Naturally, some of my colleagues are now complaining they can’t understand what Ms. Furlong’s saying behind the mask.

But how is that different from you sitting at home, watching virtually, and not being able to understand what Assemblymembers are saying when THEY speak on the floor?

The answer, of course, is it’s not.

And the common-sense solution is to drop the mask mandate for EVERYBODY in the Chamber.  But that would undermine their efforts to keep as much of the public out of the building as they can for as long as possible.

And they sure as heck don’t want that!

The Death Penalty as Deterrent

For those claiming the death penalty is not a deterrent, consider this Breitbart News story from just this week…

“A murderer who was paroled following decades behind bars has reportedly been accused of killing another individual in Los Angeles after his release.  According to Fox 11, the suspect was recently charged in the stabbing murder of a woman in the weeks after the state canceled his parole conditions.”

Eddie Allen Harris was in prison because he “raped and stabbed a woman to death before leaving her body in an alley” back in 1982.  He was released “due to changes in state law reducing California’s elderly parole eligibility to the age of 50.”

Had Mr. Harris been executed, he would have been permanently deterred from killing anyone else ever again…and that second woman victim would be alive today.

“Attention, Gov. Steve Sisolak: I have had (and survived) COVID-19. I have been vaccinated. Why is the government requiring me to wear a mask? What law gives you that power? Where is the science that says forcing me to wear a mask is a health benefit to anyone?” – Jeff Fritz, Las Vegas Review-Journal

“To my knowledge the social distancing edict isn’t what people objected to. It’s having to wear that horrible mask. I’d be willing to maintain any distance from people if I didn’t have to wear the stupid thing. I’ve had both injections and, according to the science, am no longer in danger of either catching or transmitting the disease. A better idea would be to turn over the mask wearing decision to individual businesses, as is happening in many other states.” – Steve Bayliff, Las Vegas Review-Journal

Why I Voted for AB42

Is Anyone Else Tired of “Junk Racism”?

Why I Voted for AB42

Uh-Oh, the “Table Scrap Republicans” are Mad at Me

Yet Another Example of Republicans Voting Badly