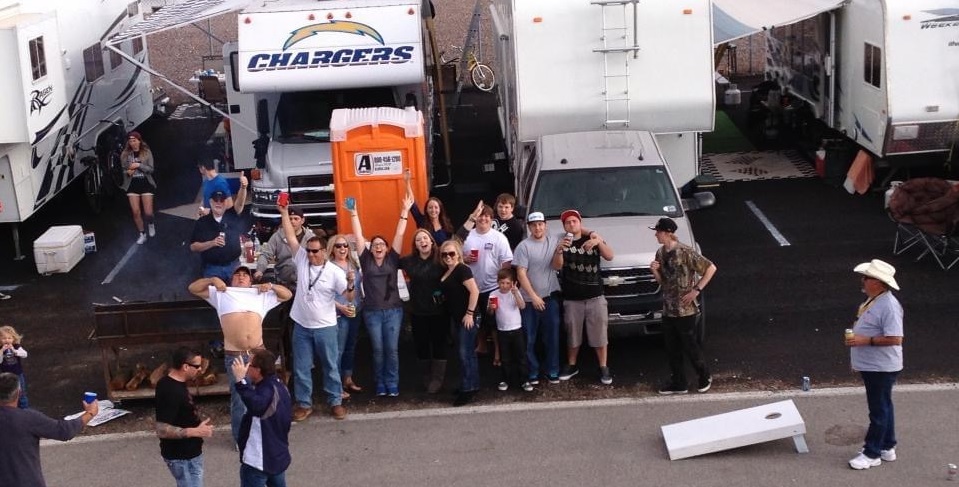 I’ve been going out to the Las Vegas Motor Speedway (LVMS) for the annual NASCAR race for years.  It’s a blast!

My family and friends usually rent spots on the infield and make a whole weekend party out of it.  Always a great time.  Everybody loves it.

See if you can find me in the photo above.  (No, I’m not the one pulling my t-shirt up!)

The Southpoint 400 NASCAR playoff race is scheduled for next Sunday.  But we won’t be there.  Can’t.  By imperial order of Nevada Gov. Steve Sisolak.

And like most of the governor’s other “emergency” orders, this one makes absolutely no sense whatsoever.

According to a report in the Las Vegas Review-Journal on Saturday (“No Fans Allowed for Vegas Race”), the speedway went well BEYOND what should have been necessary to safely allow fans in the stands.

LVMS wanted to allow up to 8,000 spectators – which would be about 10% of capacity – well under the 50% capacity allowed for casinos, restaurants, etc.

Mr. Powell also noted that in Bristol, Tennessee on Saturday night, some 25,000 spectators were allowed to watch the race in person.

“In Texas, they’ve had fans,” he added.  “In Daytona, they had fans.  So many other speedways.”

Powell also advised that a detailed health and safety plan was submitted to the state four weeks ago.  The governor’s response this past Friday:

“I am as disappointed in our governor as I could possibly be.  We have worked behind the scenes through every channel we know.  I’ve spoken to the governor.

“Two Wednesdays ago I expressed to him how important this was to me and the speedway.  He promised he would get back to me within 48 hours.  He has yet to call me back.”

Mr. Powell also noted that it’s not just the fans who are being made to suffer, but the thousands of people who usually pick up some extra money working the event…

“Yeah, they might be part-time jobs for most people, but these are jobs people depend on.  To have to tell these people that we’re not hiring you because we’re not having any race fans at the event … the frustration level is off the charts.”

“We have taken every step imaginable to take into account race fans’ desire to see a race and see it in a safe environment.  Here we are a destination city and we have a government that is slapping tourists in the face.”

If it’s “safe” to cram people together walking along the Strip and inside casinos, it’s certainly safe – SAFER! – to allow 8,000 people to sit in the speedway’s stands that hold 80,000.

This is just another nonsensical, arbitrary, unilateral, conflicting and discriminatory decision by Gov. Sisolak – who loves to wield the “picking winners and losers” power he’s bestowed upon himself.  As Vice President Mike Pence said…

NASCAR fans overwhelmingly support President Trump.  And you won’t see anybody kneeling during the National Anthem (they’d get an old-fashioned whoopin’!).

Gov. Sisolak despises anything and anyone who supports our president.  So the decision to ban fans at LVMS next Sunday obviously is, as usual, purely political.

I think I know where the president should hold his next Vegas campaign rally/peaceful protest!

“Definitely like your attitude and your statements. So, damn few politicians keep their promises once elected. I am half-tempted to move to Mesquite just so I can say I have an assemblywoman that does what she says she is going to do.” – Dave Austin

“Thanks, Dave.  Just know I intend to be THE conservative representative for ALL Nevadans.  You don’t have to live in Mesquite to share thoughts, express frustrations or ask for help.  I’m here for you!”

“Biden, to me, is like taking a flashlight with a dying battery and going for a long walk in the woods.” – Joe Rogan

Yea just found out about this… what sucks is that Ticketmaster allowed me to purchase tickets, and because of that I told my beyond excited 4 year old son he can see his first NASCAR race, which he LOVES any kind of car.

Now I have to try and explain to my son that our usless Governor won’t let us go. Gov Sisolak sucks.