Speaker Frierson to You: “Pound Sand!”

While Republican Minority Leader Robin Titus sits on the sidelines watching the parade go by.

In case you just joined us, here’s a recap…

I requested that a bill be drafted calling on the Legislature to terminate Gov. Steve Sisolak’s “Declaration of Emergency” as allowed by Nevada Revised Statutes (NRS).

The bill (ACR2) was drafted and officially introduced last week.

The Speaker then tried to kill the bill in its cradle by placing it on the Chief Clerk’s desk.  This means it wasn’t assigned to a committee for a hearing.

So yesterday I attempted to make a motion under “Order of Business 8” (motions) to remove the bill from the Clerk’s desk and assign it to a committee.

But Speaker Frierson didn’t call on me, even though my light was on, and just moved on.

So when we got to “Order of Business 15” (statements), I rose and requested that we return to Order of Business 8 (same thing I did last week on my motion to reopen the legislative building) since I wasn’t allowed to make my motion at the “proper” time.

The Speaker relented, recognizing I was following the rules correctly (as I did last week).  So I made my motion.  Then the Speaker immediately called a recess.

When we returned MLTBT made a motion to put my MOTION on the Chief Clerk’s desk!

MLTBT then withdrew her motion to table my motion.  But instead of acting on my motion, as per the rules, they just ignored my motion and moved on.

Anyone else getting motion sickness at this point?

The Democrat-Socialist leaders are ignoring the rules THEY passed and are simply making it up as they go along.  All without a peep of protest from GOP Minority Leader Titus.

But I’m STILL not giving up.

After all the shenanigans played out, I rose again and made the following statement… 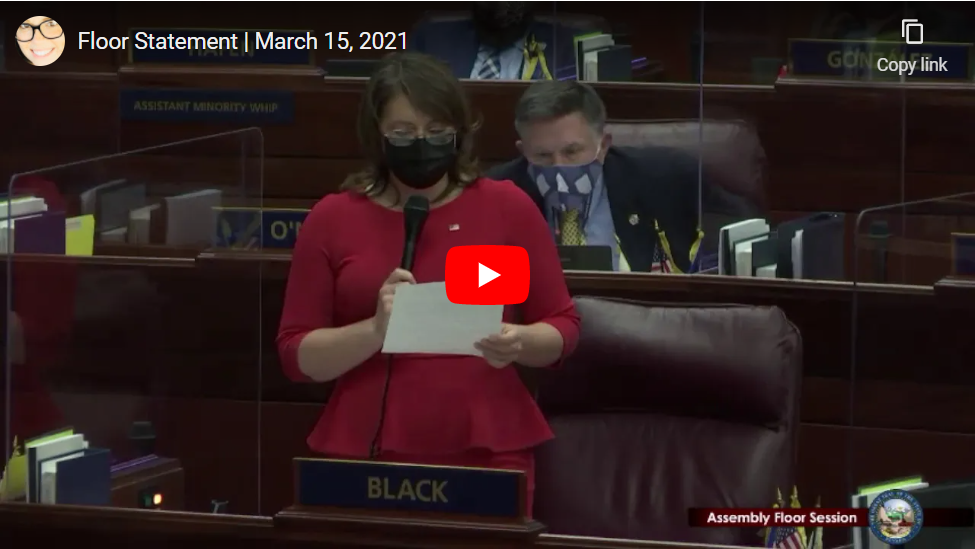 “If the majority of this body votes to continue allowing the Governor to operate under the current State of Emergency, fine.  But we should hear testimony from the public.  We should listen to experts with differing opinions.  We should have debate among legislators who represent vastly different constituencies.  And we should have a recorded vote.”

Why are so many legislators – Democrat and Republican alike – so afraid of even discussing this critical issue to so many of the Nevadans they were elected to represent?

Anyway, I want to thank you for your calls, texts, emails and social media posts thanking me for not giving up on this fight against all odds.  Your support means the world to me.  YOU are who I’m fighting for, whether you live in my district or not.

And for those who have asked, “What can I do to help?” here are three small action items that could make a big difference…

1.)  Contact Speaker Frierson and let him know you want a hearing and a recorded vote on ACR2.  Here’s his contact information…

Remember: Be polite.  Be courteous.  But be firm.  No personal attacks or profanity.

2.)  Contact GOP Minority Leader Robin Titus and encourage her to get into the game…

3.)  Register your support for ACR2 by going to the Legislature’s website, enter the bill number and click on the “In Favor” button.  Here’s the link…

Actually, there’s a fourth thing you can do: Encourage all your friends, followers and folks on your email list to do the three things above.

And we’re fighting the leader of our own party.

But as Grover Cleveland once said…

We’re nowhere near the end.  And I’m going to continue fighting to get a hearing and recorded vote on ACR2.  Thanks for being by my side!

“Assembly has suspended their rules on deadlines as well.  So in short: rules are meaningless and everything means nothing.” – Colton Lochhead, Las Vegas Review-Journal, 3/15/21

Thanks to You…a (small) VICTORY!

I just did all 3. I want to be able to return to work. It’s been 5 months since my work told me that I could not work do to the mask mandate. I need my job to help provide for my family.
Thank you, Annie, for all that you are doing for us.